On the eve of their bow on the world stage, the Scotland women’s national team have acknowledged the support of the ‘team behind the team’ who have helped them prepare for the FIFA World Cup Finals.

Shelley Kerr’s players have been supported by the sportscotland institute of sport in their preparations and had use of Oriam, Scotland’s Sports Performance Centre, as they geared up for France.

An inter-disciplinary team of institute practitioners provide bespoke support services to the home-based players all year round and international travel support for the wider squad covering 70 to 90 days a year.

An extended range of specialist services has been provided in 2019 to ensure the players are in the best condition in terms of health and well-being and physical conditioning.

Three institute practitioners (one physiotherapist and two physical preparation coaches) will form part of the squad’s support staff for the duration of the World Cup in France.

Support has been provided by the inter-disciplinary team to ensure the squad are as well prepared as possible.

Performance nutritionists have liaised with hotels to prepare menus for all meals, performance physiologists have put in place acclimatisation and cooling strategies to ensure they are able to cope with the heat.

The Performance Lifestyle team has also provided an opportunity for players to improve their French language skills.

An increased focus and investment from the sport medicine team has ensured that the players’ health status has been monitored throughout the year to keep them in top condition throughout this intense competitive period.

Head coach Shelley Kerr said: “We’ve adopted a new style of play which involves playing at higher intensity, so through the great work and the partnership that we have with sportscotland, it’s really important for the players that they’re in the best possible condition going into the World Cup.

“They’ve got daily diaries that they have to fill in, in terms of GPS results, high-speed runs etc, and the football is one part of it but you need to be able to match the physical capabilities of all the other teams as well. 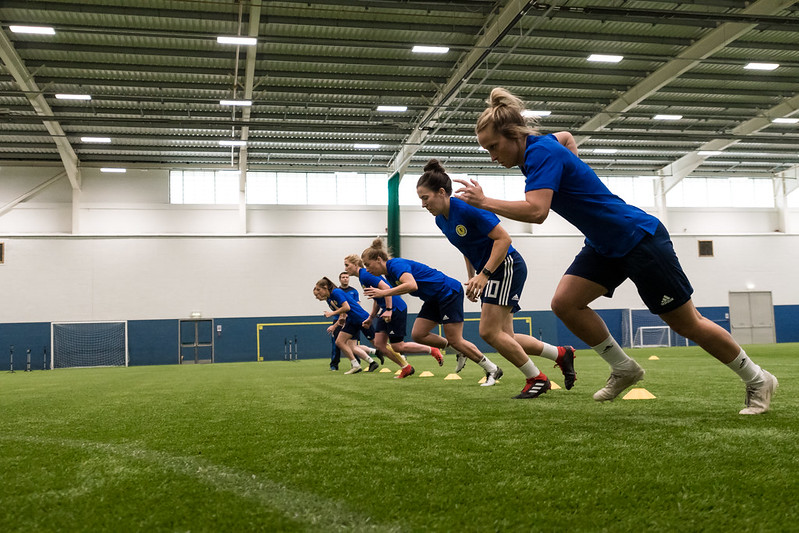 “I think that over the last month or so, they have increased their training as well. So I am hoping and I think everyone in Scotland will be hoping that we can see that right away when we get to the World Cup.”

Defender Hayley Lauder added: “It’s helped us massively throughout the years. I think our physical capacity is now on a different level as a team and as a squad.”

Goalkeeper Lee Alexander said: “Aside from the strength and conditioning we’ve got the medical side as well, and the amount of support we have had over the years has been incredible.

“Both myself and Hayley have unfortunately had injuries through our time and we have been put back on the pitch in no time and it’s all due to the help we have had from sportscotland.”

The team have also been boosted with a bursary from Scottish Government which enabled those home-based international players in full-time employment or education to focus full-time on football and ensure there was no compromise on their preparations for this summer’s tournament.

Chief executive of sportscotland, Stewart Harris, said: “On behalf of everyone at sportscotland I’d like to wish Scotland the very best of luck at the World Cup in France.

“Shelley Kerr and the squad have already done the nation proud with a terrific qualifying campaign to reach this stage for the first time and fully deserve their place on the sport’s biggest stage.”