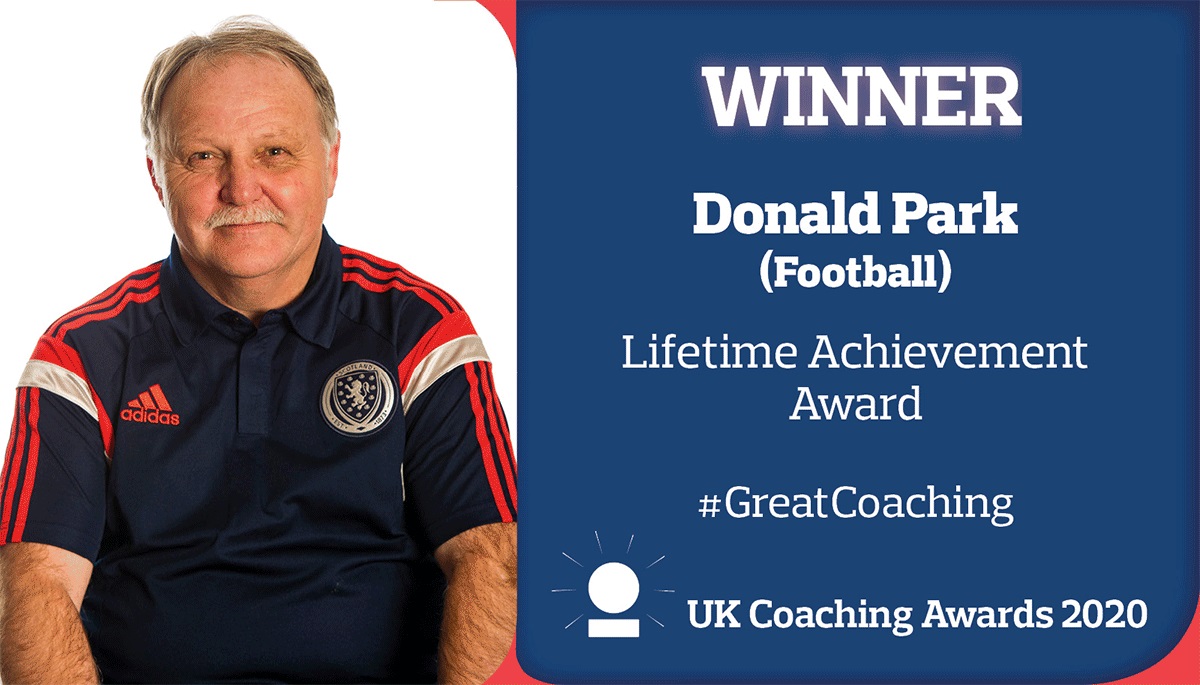 Donald Park, affectionately known as ‘Parky’, has been announced as the winner of the Lifetime Achievement Award at this year’s UK Coaching Awards, which took place virtually on Thursday, 3 December.

The award was officially presented to the former Scotland Under-19s coach by Scottish FA Head of Coach Education and Development Greig Patterson on the evening of the prestigious event to recognise his achievements through a lifetime dedicated to coaching.

Originally from Lochaber in the Highlands, Parky’s impact on Scottish football has stretched far and wide. Across his career, which spans five decades, he has been a player, coach, manager, coach educator, volunteer and member of staff with the Scottish FA. His reach has largely included working with young Scottish talent at grassroots clubs, professional clubs and at international level.

As a player, he is best remembered for his time at Patrick Thistle and two spells at Hearts. His coaching career saw him take up posts at Meadowbank Thistle, Arbroath, Hibs, Inverness Caledonian Thistle – where as assistant manager, working under John Robertson, he helped the team win the Scottish First Division and promotion to the Scottish Premier League – and finally, as head coach of the Scotland Under-19s. So deep was Parky’s commitment to nurturing the footballing talent of young people across Scotland, he spent a lot of his time travelling back north to the Highlands, even whilst based at Hampden Park in Glasgow, to share his wisdom with youth players.

He was also Head of Coach Education at the Scottish FA for eight years, where he worked to develop and broaden coaching opportunities, and used his influence to write, design and deliver coach learning to thousands of coaches. Parky was the driving force behind a bespoke UEFA B Licence for Scotland’s women’s team players, helping several start their coaching journey.

Having retired from his head coaching role with the Scottish FA in 2018, he returned to Hearts to support all the youth coaches at the club’s academy as a coach mentor. Despite his storied career, Parky continues to give back to the part of the game he loves most: grassroots football. He can be found as a volunteer at his local club, Spartans in Edinburgh, where he currently works with their Under-13s.

Acknowledging the countless hours and infectious enthusiasm he continues to give to the sport he loves, Celtic FC captain Scott Brown said that Parky had shown him the true meaning of being a professional footballer.

“He gave me confidence as a young kid to push myself in every aspect and to truly understand the game.

"He came in every day with a smile on his face and he always wanted the best for all the lads that came into Hibernian; he had so much time for everyone.”

Former Hibs, Rangers, Celtic, Wolves, Derby, Cardiff and Scotland striker Kenny Miller called Parky “one of the best” he’d ever worked with and former Hibs and Rangers midfielder Kevin Thomson said that he was one of his favourite coaches throughout his whole career.

“As a young player, he helped guide me on the right values you need not only as a player but as a person.

“His demand of the highest standards every day are the same that I demand of my players now as a coach at Rangers. His infectious personality and love of the game can’t help but make you gravitate towards him.”

“If I’m being completely honest, it’s an absolute shock to receive this award. To be presented with this award for doing something that I’ve loved for so long, and been very lucky to be involved in, is very humbling.

“It’s very nice to hear from players and coaches I’ve worked with during my career and what they have to say about me. I’ve been lucky to have worked with so many talented people and seeing some familiar faces when I received the award meant a lot to me.”

“If you’re involved in the game of football at any level in Scotland, then you more than likely know Parky. He is renowned for the attention to detail he imparts and he has an incredible ability to have everyone eating out of the palms of his hands during his sessions – whether its grassroots players, senior professionals or coaches undertaking a coach education course.

“His enthusiasm is absolutely infectious and his love for coach education was clear for all to see. I was delighted to be able to come back to the Scottish FA and work closely with Parky, getting to know him better during the three-year period we had before he moved on. There’s not a day that goes by without me reminding myself that I need to live up to the legacy he has left for the coaching workforce in Scotland and beyond.

“It is testament to the man himself that so many people within the game speak so highly of him. It’s a thoroughly deserved award.”

“Every year across Scotland, thousands of dedicated sporting enthusiasts devote their time, knowledge and skills to afford others the chance to take part in sport, and experience all the benefits that come with sport participation.

“People like Donald are the bedrock of Scottish sport and I’d like to congratulate him for an incredible career that has largely been dedicated to helping others progress.”

“We would like to add our own salute to the applause and congratulations Donald richly deserves for his efforts in changing people’s lives across 50 years of coaching.

“Great coaching is about guiding, support and inspiring people to fulfil their aspirations. It is obvious from Donald’s career that he took that responsibility extremely seriously, not only did he help mould great Scottish footballers, he nurtured them to be confident, independent and capable women, men, boys and girls. Well done once again on your fine achievement Donald.”