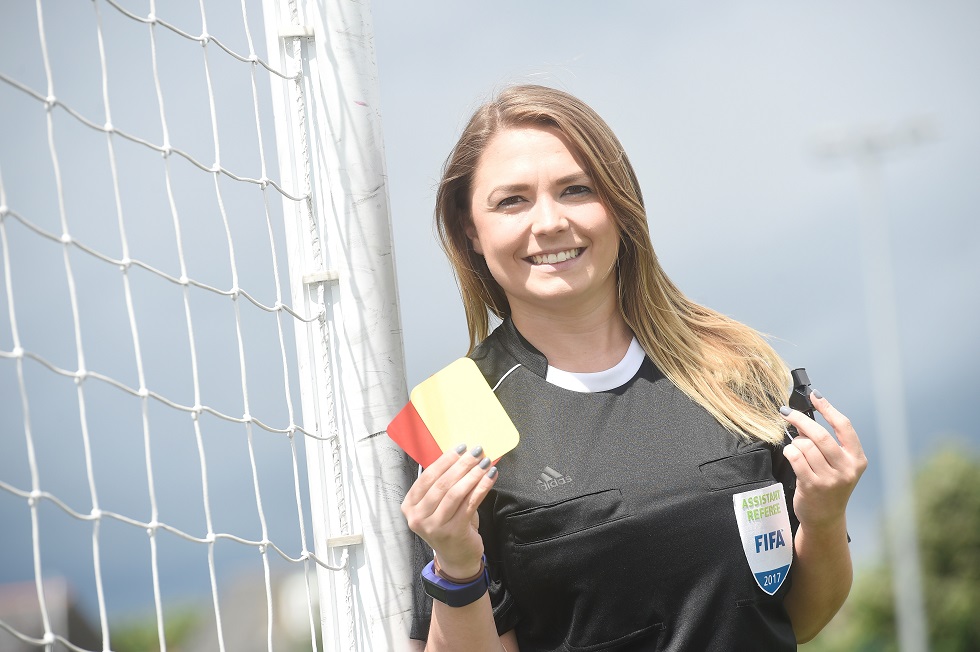 Vikki Allan was once told by friends that "women don’t referee". Nine years later she has proved that idea belongs in a bygone era and is determined to help further change by inspiring the next generation of female referees.

Inspired by her love of football and dad Crawford Allan, a category one referee who had a long career at the top level in Scotland and Europe, Vikki was met with some puzzled looks when at 16 she told friends she was going to sit the referee exam.

Fast forward nine years and Vikki is a FIFA-registered assistant referee, has run the line in Champions League and World Cup qualifiers and is helping the next generation of officials through her role as a Scottish FA Youth Ambassador, all while working full time for a finance company.

Her hard work has been recognised after she was named as a finalist for the Sunday Mail Young Scot Awards 2018, one of three finalists in the sport category sponsored by sportscotland.

During her nine years as an official Vikki insists she has seen attitudes change for the better towards female referees and is adamant we will soon see more women officiating at the highest level.

She said: “I love football and my dad was a referee, so I’ve grown up with it all my life. I got to the age of 16 and I was going to sit the referee exam, a lot of my friends said ‘women don’t referee’, so I thought I’m going to prove that one wrong.

“I definitely think attitudes are changing in the right way. Maybe the issue before was that there weren’t any role models or anyone out there that was visible in positions to inspire others. The female referees are getting better, we’re making sure we’re as fit as the male referees.

“You have Lorraine Watson who is category 1D and was the first woman to referee a senior men’s game in Scotland last year. Kylie Cockburn is on the line in the Scottish Premiership, Sian Massey is on the line down south.

“What was difficult when I was coming through was there weren’t many women I could relate to. It’s nice to have the other girls now. One of the big things I’m trying to do in Scotland is make sure that girls have role models and see that refereeing is an option.

“I think there has been a change in attitudes and I think we’re showing we can do it just as well.”

Vikki admitted she was stunned to learn of her nomination, joking that football officials rarely find themselves on the receiving end of much praise.

But she has ambitions of more accolades and one day running the line at a World Cup.

She said: “It was a big surprise, when the email came through I was quite shocked. But it was really nice to be thought of. Referees are not everyone’s favourite people on the planet so it’s nice to think that something I’m doing is making a little bit of difference.

“I’ve already decided I want to be an assistant referee, I just prefer that role. I’d love to be in the SPFL running the line and progress as far as I can in FIFA as well. Maybe one day there’s a World Cup out there for me but you have to work really hard.”

Stewart Harris, chief executive of sportscotland, said: “I’d like to congratulate Vikki on her fully deserved nomination for the Young Scot Awards. Vikki has shown incredible dedication to her sport from a young age and to have reached such a high level of refereeing already is testament to her hard work and ability.”

John Fleming, Scottish FA head of refereeing operations, said: “We were delighted to hear about Vikki’s nomination. She is a really positive role model for young officials and a great ambassador for the Scottish FA and football in general. Her tireless work ethic and unfailing enthusiasm is an example to us all.”