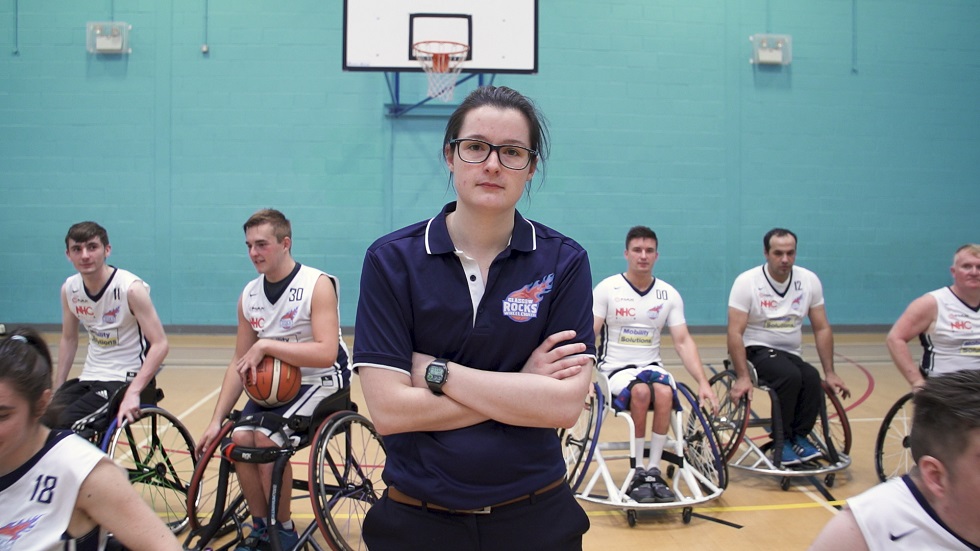 A Glasgow coach has been recognised for her dedication to wheelchair basketball after winning sportscotland’s Performance Development Coach of the Year award.

Jennifer Scally has had a major impact on wheelchair basketball in Scotland, helping the growth of the junior and women’s game and coaching several teams very successfully.

Jennifer, originally from Northern Ireland, became hooked on wheelchair basketball shortly after moving to Scotland to study sports science and has never looked back since volunteering with the Dundee Dragons.

Her coaching career has continued to flourish several years after moving to Glasgow and she now coaches the Glasgow Rocks wheelchair basketball team.

The coach’s academic background has led her towards innovative coaching techniques and performance analysis based heavily on scientific and statistical methods.

Last season Jennifer coached the Phoenix Scottish League team in the development league and was head coach of the Scottish Women Warriors team who gained promotion in their first year in the British League. She was also asked by British Wheelchair Basketball to support the GB senior women's squad who achieved a best-ever result of silver in the World Championships.

Jennifer’s rapid rise in coaching was recognised at the start of this season when she was appointed head coach of the new Glasgow Rocks team playing in British Wheelchair Basketball Division 1.

Despite her climb up the ranks, the main goal and highlight of Jennifer’s coaching remains the same - seeing players improve and getting the benefits of sport.

She said: “To see the commitment of players who put their all into the sport and just want to do their best is my favourite bit, I’ve been fortunate enough to see that across different teams.

“I’ve been very fortunate to work with my coach mentor Tina Gordon for a long time. I’m very scientific and statistically based in terms of performance analysis to read and understand the game. Anything we can use to help players understand the game we do.

“But seeing players get better is just the best part. I’m a coach because I want to help the players, not to do anything for myself. To see them work hard and seeing them get the benefits from that is easily the best part about being a coach.”

Jennifer picked up her award on an evening where inspirational coaches, officials and volunteers from all over Scotland were celebrated across 13 categories for their significant contribution to sport over the past 12 months.

Stewart Harris, sportscotland chief executive, hailed the young coach for her stellar work in recent years, saying: “Jennifer has done an incredible job in a short space of time in wheelchair basketball.

"The commitment, dedication and support she has offered her teams and players can’t be overstated and she’s a fully deserving winner of this award."

Find out more about the 2018 Young Coach of the Year